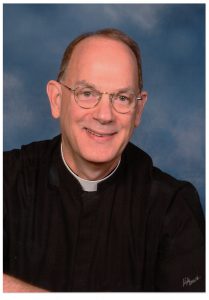 Father Joseph F. McDonald, III JCL is the pastor of St. Mary’s, Moscow and St. Mary’s, Genesee. He was ordained a priest on June 26, 1987, by Bishop Sylvester W. Treinen at St. Edward’s Church in Twin Falls, Idaho for the Diocese of Boise. After ordination, he spent three years as a parochial vicar at St. Mark’s Parish, Boise, before studying canon law in Rome for two years. Upon his return, Father McDonald was appointed pastor of St. John’s Catholic Student Center, Pocatello.

Since then he has served as pastor in a number of parishes throughout the West Central, Eastern and North Central Deaneries.   In 2010-11, he was assigned to sabbatical studies in Nairobi, Kenya at the Catholic University of Eastern Africa, Maryknoll Institute of African Studies, earning a Certification of African Studies.

He has organized many “School Auction” dinners with various themes ranging from “Gilligan’s Island” to “The Last Dinner on the Titanic”.  He is an avid stamp collector and has written a number of articles for stamp publications. He enjoys relaxing on his small farm in the Boise area which he shares with his sister, two dogs and a bird.