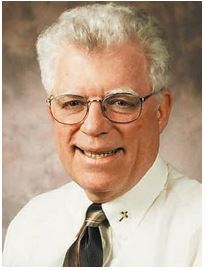 Deacon George Canney is a native of Seattle, Washington, raised in the San Francisco Bay Area. There he attended St. Joseph’s Catholic elementary and high schools, graduating in 1961. He earned a B.A. in Psychology from UC Berkeley in 1965, an M.A. in Psychology from San Jose State in 1968, an M.Ed. (with teaching credential) in1971 and a Ph.D in Education with the focus on reading in 1974–both from the University of Minnesota. Deacon George taught elementary school in St. Paul and Minneapolis, before accepting a position as an assistant professor at the University of Illinois, Champaign, where he taught for four years before coming to Moscow and the University of Idaho in 1978. He retired from the University of Idaho as a Professor Emeritus of Reading Education in 2007.

Deacon George and Caroline Canney married in 1968; they are blessed with five grown children (all married) and eight grandchildren. They have been active members of St. Mary’s since coming to Moscow. Caroline is currently the Director of Pastoral Outreach at St. Marys’, and George just finished serving as the Parish Life Director, July 2010 to June 2012. Deacon George was ordained for the Diocese of Boise October 15, 2005.

When time permits, Deacon George likes to golf, fly fish, travel, camp and backpack, and putter in the yard. He dabbles with dutch oven cooking (when he can find someone who eats his cooking). He helps with the local Scouting program in a variety of ways, is a Knight of Columbus, and consults regularly with the Coeur d’Alene Tribal school in DeSmet, Idaho.